There is no finer sight than to see a newly thatched roof glowing in the sunshine topped, if you are fortunate, with a stylish straw ornament that gives a flourish, and seems to say “well, this is a fine piece of craftsmanship, to be sure”

It is many a year since hayricks and straw stacks were thatched. Rick ornaments took various forms – a cockerel or a bird, a cross or a crown, a boat, an apple or a turnip, a “churn”, a “mell” or a “kirn”. These were usually secured by an ash-pole to the apex or the gable end of the corn rick. In his book Change in the Farm (1934) T. Hennell notes that these were called a “dolly” in Somerset. H. J. Massingham (Country Relics, 1939) refers to a “straw dolly”, describing a “cock dolly” made for him by a thatcher as being fashioned from wheat straw, with wheat ears for the crest of the bird and withy “stretchers” or short lengths of split ash to keep the wings outstretched and the fanned tail upright. 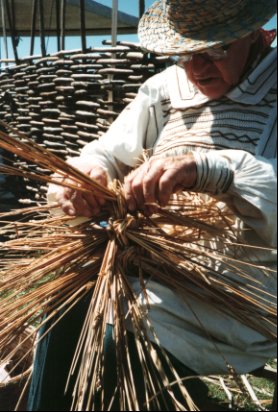 A thatch covering on a rick or stack was only a temporary form of covering, unlike the thatch on a dwelling which could be expected to last for many years. Why the ornamentation? Dorothy Hartley (Made in England, 1939) was a great researcher, and on asking this very question, was given answers such as, “the ornament would show which stack belonged to who”, or “it would show who had thatched it”. One delightful reply was “corn bird steals no corn and frits off corn-buntin’.” She was also told that such ornaments were made by those with “more time nor sens”, and this comment has been heard on many an occasion since then.

Old country beliefs were that the stack and rick ornaments would keep away both birds and witches. The designs were originally of a religious nature, thus intended to scare away witches, but a countryman always hedges his bet, and would say the ornaments also gave a witch something to play with, thus diverting her attention from making mischief elsewhere.

Straw ornaments on the thatch of houses have been recorded as far back as 1689 according to T. G. Paterson, who noted references to straw crosses on roofs in Ireland. From the humble hayrick and straw stack, straw ornaments can also be seen on the ridges of thatched dwellings. The skill of the thatcher has moved into new dimensions, and modern ornaments such as aeroplanes, fishes, pigs, dragons, and even a “millennium bug” can now be seen and enjoyed, though the traditional pheasants and foxes still remain firm favourites. 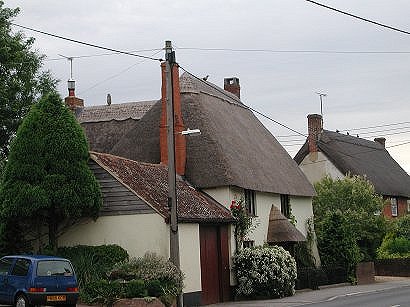 Although the term “dolly” is used at times to describe a stack ornament, it should not be confused with the corn dolly. The thatcher’s dolly is constructed very differently: the simpler designs such as a perched bird or fish uses straw that is bunched and tied firmly into shape; with the more complicated designs such as a fox, lamb or peacock, the straw is wired onto an armature. Some birds are constructed and set into the roof to serve as a weather vane, and very fine they look, too, spinning in the breeze. (Another meaning of the term thatcher’s dolly refers to the roll of straw laid upon the ridge of a roof, serving as a former for the ridge straw prior to capping.)

The craft of thatching often runs in families, and the creative skills are passed down. Several families are well-known for their distinctive designs of ornaments. One Somerset thatcher who had the misfortune to suffer a serious accident which ended his thatching career then went on to specialise in making straw roof finials. He is known to have been able to make over twenty different designs of birds, leaping salmon, peacocks, squirrels, etc. many of which can now be seen in places such as Glastonbury Museum, and Perry’s Cider Mills Museum in Dowlish Wake, Somerset. 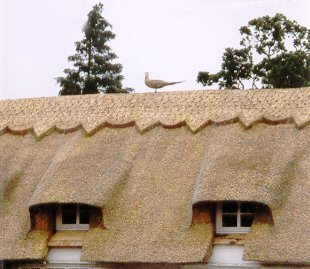 C. H. Warren (Corn Country, 1940) mentions the lamb finials of the limestone belt, and also dispels the myth that the patterns cut in the straw just under the ridge were of special significance or a particular thatcher’s “trademark”, explaining that the double thickness was necessary where it bore the brunt of the weather. Similarly, the herringbone or diamond pattern of withies worked along the eaves served a practical rather than purely decorative purpose, tethering the straw more securely on an exposed area of the roof.

Links to Thatchers and Thatching

More information about Thatchers and Thatching can be found by following the link below:

1. THE BASIC MATERIAL For Corn Dolly making and decorative straw work a hollow stemmed straw is required, with a good length between the head of the wheat and the […]

There is no finer sight than to see a newly thatched roof glowing in the sunshine topped, if you are fortunate, with a stylish straw ornament that gives a flourish, […]